﻿ Bill Terry had some big shoes to fill in midseason 1932, when he took over managing the second division New York Giants for the iconic John McGraw. The next year, his first full season as player-manager, “Memphis Bill” guided the Polo Grounders to the pennant and a World Series victory over a strong Washington Senators team.
This is the complete story of how Terry reshaped the club he inherited, molding them into world champions at the height of the Great Depression. The author provides a game-by-game season narrative, with detailed depictions of each Fall Classic contest.
Biographical overviews of the Giants’ primary players and an analysis of the first All-Star Game are included.

Lou Hernández is the author of several baseball histories. He resides in South Florida.

2. The Outfield Headed by “Master Melvin” 38

3. The Pitching Staff Sustained by “The Meal Ticket” 53

4. The Bullpen Stabilized by “The Pride of Havana” 89 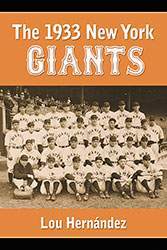