The 117th New York Infantry in the Civil War

A History and Roster

“Not known to the historic pen, or platform orator,” wrote a soldier in the 117th New York Volunteer Infantry, “but the private led in the horror of the fight.” Drawing on firsthand accounts, this history of the regiment narrates the monotony and privation of camp life, the exhaustion of long marches and the terror of combat from the perspective of the regular soldier. The operations of the 117th are fully detailed, including actions in the 1863 Suffolk Campaign, the siege of Charleston, the captures of Petersburg and Richmond, and the conquest of Fort Fisher, North Carolina.

James S. Pula is a professor emeritus of history at Purdue University Northwest. The author of numerous books, his work has been honored with the Mieczysław Haiman Award for sustained scholarly contributions to Polish American history and culture, the Distinguished Service Award from the American Council for Polish Culture, three Oskar Halecki Prizes for various books, and the Officer’s Cross of the Order of Merit of the Republic of Poland, among others.

• “James Pula has written one of the most enthralling, scrupulously-researched, and important Union regimental histories of the last two decades. He recreates the service of the 117th New York in sparkling detail, explaining that their service was at once typical and unusual, allowing the words of the soldiers to speak for themselves. This book is both good history and a crackling good story.”—Christian B. Keller, professor of history, U.S. Army War College

• “James Pula has skillfully woven the diaries and letters of the men from the 117th New York into a comprehensive narrative of the regiment which spearheaded the final assault on Fort Fisher, North Carolina. I thoroughly enjoyed it and believe this work fills a void in the history of the forgotten places in the war.”—John Michael Priest, author of Antietam: The Soldiers’ Battle and “Stand to It and Give Them Hell”: Gettysburg as the Soldiers Experienced it From Cemetery Ridge to Little Round Top, July 2, 1863

• “A magnificent new book from first-rank Civil War historian Jim Pula. Never have I encountered a better portrayal of the life and character of the common soldier in camp and in battle than in this fine-grained portrait of the 117th New York Volunteer Infantry. Not least, this painstakingly researched and handsomely written book delivers valuable insight into oft-neglected campaigns, from the contest for the eastern theater’s barrier islands and coast, to the Bermuda Hundred Campaign.  A great pleasure to read and a splendid resource that enriches our understanding, I cannot see how any regimental history could better portray the reality of the resilient, devoted Union soldier than the book in your hand.”—Ralph Peters, author of Cain at Gettysburg and Judgment at Appomattox 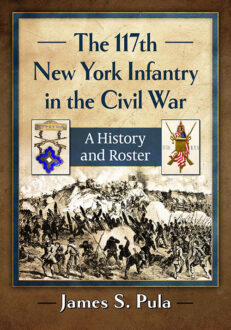