That the Nightingale Return

Memoir of the Polish Resistance, the Warsaw Uprising and German P.O.W. Camps

On August 1, 1944, Leokadia Rowinski and fellow members of the Polish Resistance movement 1saw the culmination of their five years of training—the Warsaw Uprising. Six weeks later, she celebrated her twenty-first birthday.
As a member of the Resistance, Rowinski witnessed firsthand the devastation that World War II brought to Poland. While continuing her schooling in the clandestine education system established upon German occupation, she worked in the Resistance’s communication services, often dodging German snipers and soldiers to deliver military orders to Resistance leaders. She was captured by the Germans after the Warsaw Uprising and spent six months in P.O.W. camps before being liberated by the Polish 1st Armored Division, an expatriate army under British command that included her future husband. This poignant story of a young woman’s coming of age in war is a vivid reminder of the horror inflicted upon Poland in World War II and beyond.

Leokadia Rowinski emigrated to the United States in 1951. Now retired, she lives in Holyoke, Massachusetts.

9. Living, Loving, and Dying in a Conquered City 62

15. Oberlangen, the Last Encounters with Captivity 121 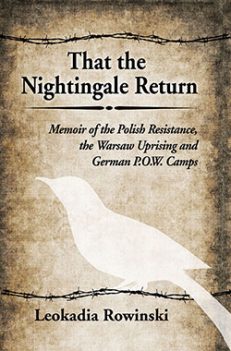 You're viewing: That the Nightingale Return $19.99
Add to cart