The Life of the Prolific League Founder, Scout, Manager and Unrivaled Huckster

In his day, perhaps no one in baseball was better known than Irish-born Timothy Paul “Ted” Sullivan. For 50 years, America’s sportswriters sang his praises, genuflected to his genius and bought his blarney by the barrel. Damon Runyon dubbed him “The Celebrated Carpetbagger of Baseball.” Cunning, fast-talking, witty and sober, Sullivan was the game’s first player agent, a groundbreaking scout who pulled future Hall of Famers from the bushes, an author, a playwright and a baseball evangelist who promoted the game across five continents. He coined the term “fan” and was among the first to suggest the designated hitter—because pitchers were “a lot of whippoorwill swingers.” But he was also a convert to the Jim Crow attitudes of his day—black ballplayers were unimaginable to him. Unearthing thousands of contemporaneous newspaper accounts, this first exhaustive biography of “Hustlin’” Ted Sullivan recounts the life and career of one of the greatest hucksters in the history of the game.

Pat O’Neill is a retired publicist and marketing executive and former editor of a Colorado weekly newspaper. He currently is president of the board of the Kansas City Irish Center.

Tom Coffman has spent nearly 30 years as a media and government relations practitioner in the solid waste industry. He has worked as a reporter, editor and photographer for a weekly newspaper. He lives in Mission, Kansas. 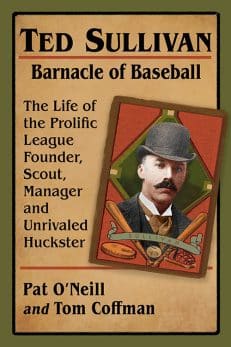 You're viewing: Ted Sullivan, Barnacle of Baseball $39.95
Add to cart