This critical biography chronicles both the actual travels and the philosophical meanderings of Talbot Mundy, one of the pioneers of the fantasy and adventure genre. Less celebrated than his contemporaries Rudyard Kipling and Joseph Conrad, Mundy was no less gifted when it came to the literary portrayal of faraway lands. He was one of the first Western writers to show an appreciation of Eastern culture, and his writing became an outlet for his radical ideas on religion and philosophy.
At the age of sixteen, Mundy left his native England to begin his life of adventure—a journey that took him from India to the Middle East to Tibet and finally to America, which became his adopted home. The American spirit of adventure matched Mundy’s own, and it was here that he found a true audience for his work.
This book explores Mundy’s oeuvre—much of it set in exotic locales through which he himself had traveled—and considers both his novels and his lesser known writing, as well as his film and radio work. Books such as Rung Ho!, King-of the Khyber Rifles, Caves of Terror, Purple Pirate and Tros of Samothrace are discussed and placed within the framework of Mundy’s life and philosophy. The final chapter evaluates the enduring value of his writings. Appendices include a comprehensive list of Mundy’s works and a chronological listing by their original publication dates.

Brian Taves is the author of six books and more than 60 articles on popular culture and media. A film archivist for the Library of Congress, he lives in Washington, D.C. 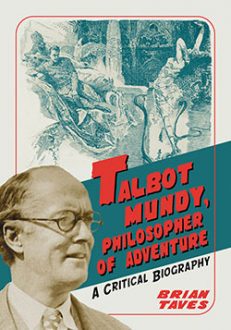 You're viewing: Talbot Mundy, Philosopher of Adventure $39.95
Add to cart