Unlike most makers of modern or futuristic films, George Lucas turned away from the standard special operatives or secret agents when he created the heroes for his epic Star Wars saga. Part knight, part monk, the Jedi Knights were an order of swordsmen that helped rule the universe in accordance with law and lofty principles of justice and honor. Without the Jedi, there could be no Star Wars, and without the lightsaber sword, there could be no Jedi. This examination of the Jedi Knights, their adversaries the Sith and their lightsaber swordplay throughout all six episodes of the franchise evaluates the ways in which Lucas blended science fiction with the most ancient and epic tales of traditional samurai and Western swordsmen. It presents swordsmanship as a way to better understand the Jedi Knights, focusing on the human movement and activity surrounding the weapon and the ways in which traditional Japanese martial arts were adapted for use in the films. Topics of discussion include the powerful effects of the master-apprentice relationship; the technical choreography used in the lightsaber scenes of the Star Wars films; and the historical precedents for the Jedi order, including the Sohei fighting monks of Japan, the Janissaries and Mamelukes of Islam, and the knights of the Templar, Hospitaller and Teutonic orders.

An educator and writer, Nick Jamilla has represented the Philippines at the World University Games and the World Fencing Championships. He has taught fencing and martial arts, and created the lightsaber choreography for the independent Star Wars film Revelations. 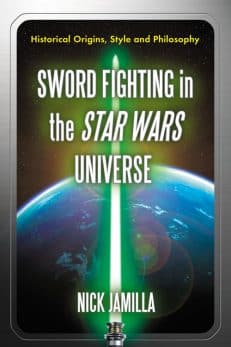 You're viewing: Sword Fighting in the Star Wars Universe $19.99
Add to cart