Essays on the Plays and Other Works

The first African American woman to win the Pulitzer Prize for drama, Suzan-Lori Parks has received international recognition for her provocative and influential works. Her plays capture the nightmares of African Americans endangered by a white establishment determined to erase their history and eradicate their dreams. A dozen essays address Parks’s plays, screenplays and novel. Additionally, this book includes two original interviews (one with Parks and another with her long-time director Liz Diamond) and a production chronology of her plays.

Philip C. Kolin is the University Distinguished Professor in the College of Arts and Letters at the University of Southern Mississippi, where he teaches classes in American drama and Shakespeare. He has published more than 40 books and 200 articles.

Everything and Nothing: The Political and Religious Nature of Suzan-Lori Parks’s “Radical Inclusion”      20

“Jazzing” Time, Love, and the Female Self in Three Early Plays by Suzan-Lori Parks      34

“You one of uh mines?” Dis(re)membering in Suzan-Lori Parks’s Imperceptible Mutabilities in the Third Kingdom      45

“For the Love of the Venus”: Suzan-Lori Parks, Richard Foreman, and the Premiere of Venus      76

Does Reshuffling the Cards Change the Game? Structures of Play in Parks’s Topdog/Underdog      103

A Production History of the Works of Suzan-Lori Parks      203

• “A comprehensive panoramic view of Park’s ongoing artistic journey. When you finish the book, you’ll feel as though you’ve been personally introduced to the writer over a long, leisurely dinner and a few glasses of good wine…and that you’ve heard her sing her life, her art and her love of God, the inner guide for whom she writes”—American Theatre

• “This collection is wide-ranging, informative, and accessible, especially when it come to Parks’s rather daunting early plays”—Project Muse

• “Conveys the importance of women playwrights from a range of cultural backgrounds, adding not only to our fundamental understanding of the struggles of marginalized and overlooked peoples but also to our comprehension of the complex experiences of American women today”—Contemporary Women’s Writing

• “This critical anthology offers the most comprehensive approach to the works of Suzan-Lori Parks’ work to date…consider[s] the eclectic and prolific Parks with careful detail and fresh insight…this is indeed an important new study.”—Harry J. Elam, Jr., Stanford University

• “Parks emerges from these pages as the national mythmaker, the unbounded intellect, and the fearless visionary she is.”—Una Chaudhuri, New York University

• “A most effective presentation of the depth, breadth, and diversity of Parks’s writings…one of America’s most influential playwrights of this century.”—Sandra G. Shannon, Howard University 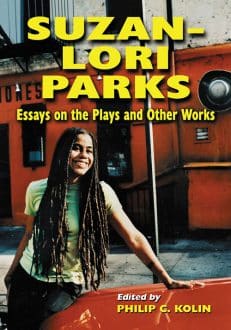