The United States has the highest documented incarceration rate in the world; in 2008, for every 100,000 citizens, 764 were in jails or prisons. With nearly half of ex-convicts committing crimes after their release, numerous support programs exist to facilitate their successful reintegration to society.
This is a directory of ex-offender programs run by the national government as well as by individual states (and Puerto Rico, Virgin Islands, Washington, D.C.). Addresses, phone numbers and web sites are listed for all organizations that aid the ex-convict in locating employment, housing, support groups, clothing and food. A vital resource for both organizations and individuals interested in the rehabilitation of released offenders.

Harry Spiller served two tours in Vietnam with the Marine Corps. A retired professor of criminal justice and former sheriff of Williamson County, Illinois, he lives in Marion, Illinois. 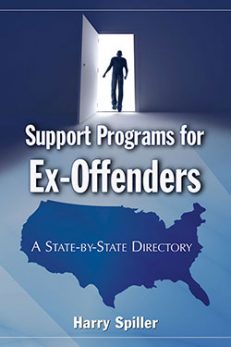 You're viewing: Support Programs for Ex-Offenders $29.95
Add to cart