String band music is most commonly associated with the mountains of North Carolina and other rural areas of the Blue Ridge and Appalachian mountains, but it was just as abundant in Piedmont region of North Carolina, albeit with different influences and stylistic conventions. This work focuses exclusively on the history and culture of the area, the music’s development and the changes within traditional communities of the Piedmont. It begins with a discussion of the settlement of the Piedmont in the mid–1700s and early references to secular folk music, including the attitudes the various ethnic and religious groups had on music and dance, the introduction of the fiddle and the banjo, and outside influences such as minstrel shows, Hawaiian music and classical banjo.

It then goes on to cover African-Americans and string band music; the societal functions of square dances held at private homes and community centers; the ways in which musicians learned to play the music and bought their instruments; fiddler’s conventions and their history as community fundraisers; the recording industry and Piedmont musicians who cut recordings, including Ernest Thompson and the North Carolina Cooper Boys; Bascom Lamar Lunsford and the Carolina Folk Festival; the influence of live radio stations, including WPTF in Raleigh, WGWR in Asheboro, WSJS in Winston-Salem, WBIG in Greensboro and WBT in Charlotte; the first generation of locally-bred country entertainers, including Charlie Monroe’s Kentucky Partners, Gurney Thomas and Glenn Thompson; and bluegrass and musical change following World War II.

Musician and writer Bob Carlin is the author of The Birth of the Banjo (2007). His articles have been published in Journal of Country Music and Bluegrass Unlimited. 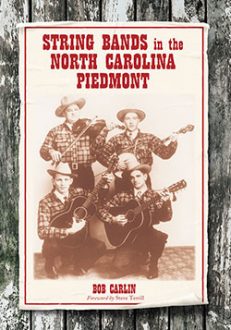 You're viewing: String Bands in the North Carolina Piedmont $29.95
Add to cart