A Chess Biography with 623 Games

Drawing on new research, this biography of William Steinitz (1836–1900), the first World Chess Champion, covers his early life and career, with a fully-sourced collection of his known games until he left London in 1882. A portrait of mid-Victorian British chess is provided, including a history of the famous Simpson’s Divan.

Born to a poor Jewish family in Prague, Steinitz studied in Vienna, where his career really began, before moving to London in 1862, bent on conquering the chess world. During the next 20 years, he became its strongest and most innovative player, as well as an influential writer on the game. A foreigner with a quarrelsome nature, he suffered mockery and discrimination from British amateur players and journalists, which eventually drove him to immigrate to America. The final chapters cover his subsequent visits to England and the last three tournaments he played there.

Tim Harding played for Ireland at the 1984 FIDE chess olympiad in Thessaloniki. He is a FIDE Candidate Master and a Senior International Master of correspondence chess. A well-known writer on many aspects of chess, Tim is a former editor of Chess Mail magazine and for almost 20 years he contributed monthly articles in “The Kibitzer” series at www.chesscafe.com. He lives in Dublin, Ireland.

• “Exhaustively researched and meticulously documented… Harding’s fine work presents a full account of what is known of Steinitz at the time, along with a game collection from the same period. Recent research and rediscovered games make this book especially valuable as a chronological account of the development of Steinitz’s chess career and the significant life events he experienced in the midst of the active London chess scene…. This is a valuable account of Steinitz’s life and times. …recommended”—Choice

• “A handsome, beautifully produced hardback book based on extensive and exhaustive research… Harding chose to include all available games from Steinitz’s time in London, some of which have only recently been rediscovered in old newspaper and magazine columns…if you want a full and accurate record of every currently available Steinitz game from his time in London, along with some earlier games from his time in Vienna and those from his later English tournaments, look no further…. this is a major addition to the literature of our game, marked by scholarly research and historical accuracy, and, as such, deserves a place in the library of anyone with an interest in chess history. McFarland and their authors are doing an enormous service to the chess community by publishing books of this nature… But it’s not just a dry as dust history book. It’s a gripping read as well. Harding tells his story with panache, leaving the reader eager to turn the page and find out what happened next… Very highly recommended: 2020 has been an excellent year for chess books and this is certainly one of the best.”—British Chess News

• “This is another beautifully produced hardback edition from McFarland and is a pleasure to read, as always.”—New in Chess

• “An outstanding work…This book is a milestone in the history of chess literature.”—MAT – Poland’s National Chess Magazine

• “In addition, [Harding] not only presents several dozen unknown and forgotten games, he also corrects the sequence of moves of many more with the greatest care, so that this publication can claim sovereignty for the correctness of the notation.”—Karl 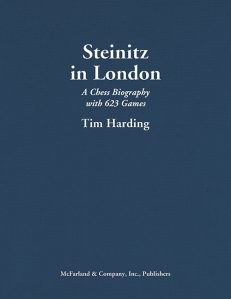