Star Trek and the British Age of Sail

The Maritime Influence Throughout the Series and Films

Clear all moorings, one-half impulse power and set course for a mare incognitum…
A popular culture artifact of the New Frontier/Space Race era, Star Trek is often mistakenly viewed as a Space Western. However, the Western format is not what governs the worldbuilding of Star Trek, which was, after all, also pitched as “Hornblower in space.” Star Trek is modeled on the world of the “British Golden Age of Sail” as it is commonly found in the genre of sea fiction. This book re-historicizes and remaps the origins of the franchise and subsequently the entirety of its fictional world—the Star Trek continuum—on an as yet uncharted transatlantic bearing.

• “A quite interesting interpretation of the series and its mechanisms is revealed, loaded with tons of information, quotes, links to etiquettes of the US and British Navy and, for the first time, a multitude of primary production materials such as set memos, guidelines and altered dialogue and plot sheets straight from the studios.”—Popcultureshelf.com

• “Deserves praise for the quality of content, the depth of research, and the clarity of thought, and should be of value to any academic interested in the history of the Star Trekfranchise.”—SFRA Review 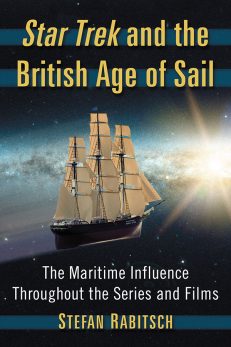 You're viewing: Star Trek and the British Age of Sail $39.95
Add to cart