A Comprehensive Guide to the Grapefruit and Cactus League Ballparks, 2d ed.

Spring training is a time of renewal for baseball, when teams and fans descend on Florida and Arizona to begin the ever hopeful new season. The pace is a little slower, the fans are closer to the action, and the players are more accessible: the sport returns to its idyllic roots. When the first edition of this book was released, 18 of the MLB teams trained in Florida and 12 in Arizona. As 2013 arrives each league consists of 15 teams; together they utilize 14 parks in Florida and 10 in Arizona.
This heavily illustrated work dedicates a chapter to each park, including modern Cactus League marvels like Camelback Ranch and Salt River Fields, and Grapefruit League bastions like Joker Marchant Stadium and McKechnie Field. Florida’s Fenway Park replica, which opened in 2012, is included. In addition to profiling the five parks that have opened since the first edition, the author has updated the other chapters. Each provides a description of the park, and a recounting of its history, followed by a summary of the home team or teams’ spring history. Next is a review of the park’s seating, concessions and fan traditions. Each chapter concludes with information about nearby baseball landmarks and attractions.

Josh Pahigian is the author of several baseball books, including The Ultimate Baseball Road Trip and 101 Baseball Places to See Before You Strike Out, and of the novel Strangers on the Beach. He has also contributed articles to a variety of magazines, including ESPN.com. He teaches undergraduate writing at the University of New England, and graduate writing at Western Connecticut State University. 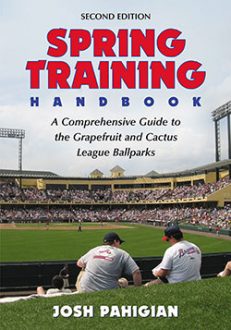