Famous for being deathly serious, the vampire genre has a consistent yet often critically overlooked subgenre—the comedic spoof and satire. This is the first book dedicated entirely to documenting and analyzing the vampire comedy on film and television. Various types of comedy are discussed, outlining the important differences between spoofing, serious-spoofing, parody and satire. Seminal films such as Abbott and Costello Meet Frankenstein, Love at First Bite, Vampire in Brooklyn, Dracula: Dead and Loving It and What We Do In the Shadows are featured.
More importantly, this book demonstrates how comedy is central to both the common perception of the vampire and the genre’s ever-evolving character, making it an essential read for those interested in the laughing undead and creatures that guffaw in the night.

Simon Bacon is an independent scholar based in Poznan, Poland. He has authored and edited many volumes on vampires, monstrosity, science fiction and media studies.

Acknowledgments v
Introduction
Simon Bacon 1
Part I: Comedy and the Vampire
What We Do in Twilight Shadows: Comedy in the Vampire Genre as Both a Celebration and a Weapon
Andrew M. Boylan 23
The Comedy of Terrors: A Humor Theory Analysis of Mel Brooks’ Dracula: Dead and Loving It
Matthew McKeague 34
Dracula in New York: The Comic, Anachronistic Vampire in Love at First Bite and Vamps
Murray Leeder 46
Less Blacula and More Buffy: The ­Self-Aware Mythology of Vampire in Brooklyn
Valerie Estelle Frankel 57
Part II: Spoofing Across Media
Care for a Bite? Vampire-Inspired Cookbooks
Victoria Amador 73
Defanging Nosferatu: Case Studies of the Neutering of Bloodsuckers, Vampires and the Undead Across Children’s Media (1950s–1980s)
Robert Mclaughlin 88
Between Sentimentality, Sentience and Sense Making: The Visual Markers of the Vampire in Online Caricatures
Phil Fitzsimmons 103
Part III: Spoofing and Gender
“Meet the Camp Vamp”: Exploring Genre, the Vampire as a Comedic Figure and Abbott and Costello Meet Frankenstein
Blair Speakman and Carmel Cedro 125
Refusing Life in the Shadows: The Anti-Patriarchal Bite of What We Do in the Shadows
Natalie Wilson 137
Mocking Masculinity: Comedy and Subversion in ­Women-Directed Vampire Films
Alexandra Heller-Nicholas and Donna McRae 150
Fuckable Bodies: Male Virginity in Vamp, My Best Friend Is a Vampire and Once Bitten
Fernando Gabriel Pagnoni Berns 162
Part IV: Seriously Spoofing
Vampires Clashing with the 21st Century: Analyzing Postmodern Irony in What We Do in the Shadows
Zita Hüsing 177
Spoofing the Byronic, Changing the Vampire: Locating the Byronic Hero in What We Do in the Shadows (2014– )
Debaditya Mukhopadhyay 190
A Spike for an Angel: How the Comic Bites into the Dramatic
Ildikó Limpár 202
“This is the bloody ­twenty-first century!” The (Post)Modern Vampires of Jim Jarmusch’s Only Lovers Left Alive
M. Keith Booker and Isra Daraiseh 213
About the Contributors 228
Index 231 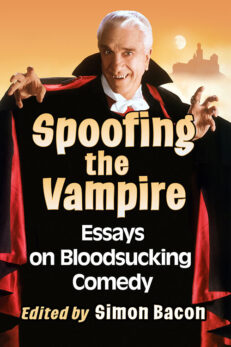 You're viewing: Spoofing the Vampire $55.00
Add to cart