Spaghetti Westerns—the Good, the Bad and the Violent

A Comprehensive, Illustrated Filmography of 558 Eurowesterns and Their Personnel, 1961–1977

Spaghetti Westerns—mostly produced in Italy or by Italians but made throughout Europe—were bleaker, rougher, grittier imitations of Hollywood Westerns, focusing on heroes only slightly less evil than the villains. After a main filmography covering 558 Spaghetti Westerns, another section provides filmographies of personnel—actors and actresses, directors, musical composers, scriptwriters, cinematographers. Appendices provide lists of the popular Django films and the Sartana films, a listing of U.S.–made Spaghetti Western lookalikes, top ten and twenty lists and a list of the genre’s worst.

Thomas Weisser is the editor and founder of “Asian Cult Cinema” magazine, as well as the author of numerous books on European and Asian cinema. He lives in Fort Pierce, Florida. 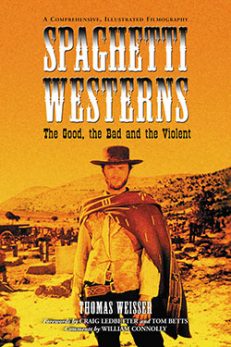 You're viewing: Spaghetti Westerns—the Good, the Bad and the Violent $39.95
Add to cart