So Far, So Funny

My Life in Show Business

Hal Kanter first came to Hollywood at age 18 to work as the ghost writer for a comic strip. Then he heard an Eddie Cantor radio show and realized that he could write better jokes. Interestingly enough, Cantor’s writers agreed with him. Thus was born one of the more interesting and varied careers in Hollywood.
Kanter’s writing career went from radio shows to screenplays to television series. He worked with Bob Hope, Frank Capra, Elvis Presley, Bing Crosby and Danny Kaye. With an Emmy for writing The George Gobel Show, he was the creator of Julia. Though he enjoyed great success as a producer and director, Kanter always first was a writer. How many scripts has he written? “More than I can lift,” he says.

The late Hal Kanter was a multiple Emmy Award–winning writer, director and producer of such feature films and television series as Loving You, The Rose Tattoo and Julia. A three term governor of the Academy of Motion Picture Arts and Sciences, he scripted 39 Academy Awards shows. He lived in Encino, California.

“the career of Hal Kanter is a fascinating one, and it is recounted here with truth and with humor…truly amazing…a wealth of detail”—Classic Images; “hugely entertaining…a must-read”—Past Times; “if you know anyone in need of a laugh, this book will do the trick”—Beverly Hills Courier; “Kanter recalls his life and career as a writer in his must-read book”—Daily Variety; “an engaging book, wise, sharply observed, deliciously droll, wonderfully anecdotal”—SPERDVAC Radiogram; “a rare and evocative autobiography”—DGA Magazine; “a marvel of warm, witty reminiscence. It is an engaging book, wise, sharply observed, deliciously droll, wonderfully anecdotal”—The San Diego Union–Tribune; “a joy to read”—The Berkshire Eagle; “if you love old time radio and like to laugh, this book’s for you”—The Illustrated Press. 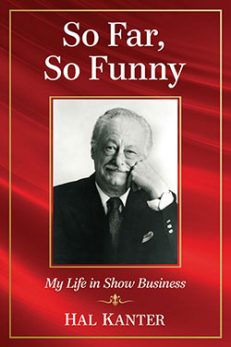