The Broadcast History of an Olympic Marquee Sport

Of all winter sports, none is so widely watched and commented upon by the media as figure skating, which is often considered the Winter Olympics’ centerpiece. This critical text examines the ways in which media attention has gradually altered and affected the sport, from the early appearances of Sonja Henie, to skating’s gradual audience growth via television, and to the ramifications of the scandals in the 1994 and 2002 Olympics. The topic is illuminated by more than 30 interviews with commentators, skaters, producers, directors and others. In addition to numerous photos, illustrations show the compulsory figures for which “figure skating” got its name, as well as a sample of the charted-out “camera blocking” for TV directors. Appendices include collected anecdotes from early broadcasting experiences; a profile of broadcaster Jim McKay; and commentary from Carol Heiss on her 1961 musical Snow White and the Three Stooges.

Kelli Lawrence, an award-winning freelance writer and producer, has published in Skating, PSA Magazine, and several other publications. She lives in Indianapolis. 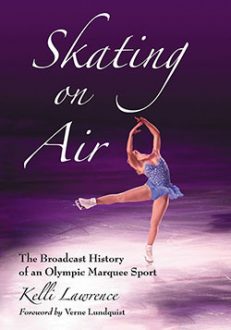