Authorship Evidence in the History Plays

Shakspere’s history plays are more than dramatized history lessons. They explore contemporary dangers inherent in royal succession at a time when Elizabeth I decreed that mere discussion of who would inherit the throne was treason. The plays were political and therefore dangerous. Yet William Shakspere from Stratford-upon-Avon was never arrested for his writing nor spent time in prison, unlike his fellow playwrights Marlowe, Kyd and Jonson.

In 1601 Sir Henry Neville was imprisoned and “Shakespeare” stopped writing history plays. The identification of Neville as an authorship candidate, put forward by James and Rubinstein (2005), urges reinterpretation of the plays. Neville enjoyed privileged access to the Holinshed Chronicles (1587), a primary source for the plays. He was ambassador to France and spoke French (see Henry V), knew the descendants of Jack Cade (Henry VI Part 2), was familiar with Crosby Place (Richard III) and lived in Blackfriars (Henry VIII).
This book reveals new evidence of Neville’s authorship, with examples of annotation found in books from Neville’s library suggesting they were source material for the plays. Numerous anomalies in the plays indicate Shakespeare’s consistent bias in portraying the Nevilles in a positive light, revealing the hidden author’s political viewpoint and true identity.

Mark Bradbeer is a registered nurse with research experience and a publication record in the biomedical literature. He lives in Australia.

The late John Casson extensively investigated the therapeutic use of drama and published two previous books on Shakespeare-Neville. 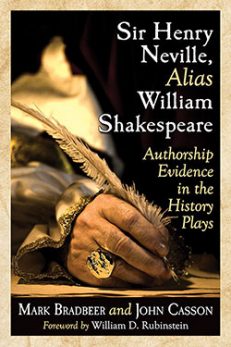