When Superman debuted in 1938, he ushered in a string of imitators—Batman, Wonder Woman, Captain Marvel, Captain America. But what about the many less well-known heroes who lined up to fight crooks, super villains or Hitler—like the Shield, the Black Terror, Crimebuster, Cat-Man, Dynamic Man, the Blue Beetle, the Black Cat and even Frankenstein? These and other four-color fighters crowded the newsstands from the late 1930s through the early 1950s. Most have since been overlooked, and not necessarily because they were victims of poor publication. This book gives the other superheroes of the Golden Age of comics their due.

Lou Mougin is a comics writer, historian, and interviewer with credits at Marvel, Heroic, Claypool, Warrant, Lucky, Charlton Arrow, InDellible, and others. He lives in Abilene, Texas.

• “An incredibly absorbing book… If you have an interest in comic books, then you really do need to read this book”—SF Crowsnest

• “[Mougin] speaks in his introduction of waiting for a book like this to come along. A more definitive history of some of these long-forgotten characters. When such a book refused to show up, Lou wrote it himself. And I’m glad he did.”—First Comics News

• “Anyone who ever enjoyed one of Lou’s Hero Histories back in the glory days of Amazing Heroes would certainly never question that and that love shines through on every text-heavy page of Lou’s new book… His writing is informed and informative… A fount of trivia, Mougin constantly offers up fascinating little asides… Comic fans of my generation, who just had to find out every little detail of what came before the Silver Age of Comics, will cherish Lou Mougin’s Secondary Heroes of Golden Age Comics.”—Forces of Geek 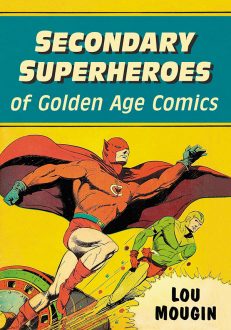