Episode Guides, Histories, and Casts and Credits for 62 Prime-Time Shows, 1959 through 1989

Whether rocketing to other worlds or galloping through time, science fiction television has often featured the best of the medium. The genre’s broad appeal allows youngsters to enjoy fantastic premises and far out stories, while offering adults a sublime way to view the human experience in a dramatic perspective.
From Alien Nation to World of Giants, this reference work provides comprehensive episode guides and cast and production credits for 62 science fiction series that were aired from 1959 through 1989. For each episode, a brief synopsis is given, along with the writer and director of the show and the guest cast. Using extensive research and interviews with writers, directors, actors, stuntmen and many of the show’s creators, an essay about each of the shows is also provided, covering such issues as its genesis and its network and syndication histories.

Mark Phillips is a Canadian correspondent for the New York–based magazine Starlog. He has written for Cinefantastique, Filmfax, Outre and Britain’s TV Zone and lives in Victoria, British Columbia.
Frank Garcia is a science fiction media journalist whose work has appeared in Cinefantastique, Filmfax, Starlog, Video Watchdog and other publications. He lives in Vancouver, British Columbia. 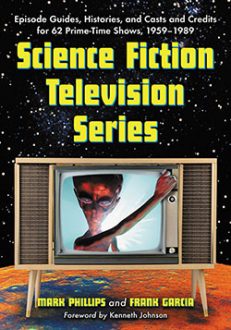