Interviews with 23 Monster Stars and Filmmakers

David Hedison, who plays a tiny human-headed insect menaced by a spider at the climax of The Fly (1958), says the moviemakers spoiled the scene by giving him a squeaky voice. “Imagine if, as the camera moved in closer, you actually heard me screeeeaming for my life. That is horror. That is horror.”
In Tom Weaver’s eighth interview book, Hedison—and 22 other moviemakers—talk about their horror and science fiction movie experiences as part of such films and TV series as The Blob, It Came from Outer Space, Tarzan the Ape Man, Star Trek, The Wild Wild West, Somewhere in Time, The Devil Bat and Forbidden Planet. Among those interviewed are Dan O’Herlihy, Kate Phillips, John Alvin, Anthony Cardoza, Tod Griffin, Alex and Richard Gordon, Suzanne Kaaren, and Warren Stevens. Full credits are provided for the actors, actresses, and producers.

Anthony Cardoza on The Beast of Yucca Flats      37

“one of the leading scholars in the horror field”—New York Times; “the king of the monster hunters”—USA Today; “one of our foremost fantasy film historians”— Sight & Sound; “cheerfully upbeat, generously illustrated”—Booklist; “the king of the interviews…something for everyone who loves any kind of film, and it’s never dull…Tom Weaver is amazing, and long may he rule”—Classic Images; “Tom Weaver has enjoyed a lengthy career writing about the horror genre through his reference guides and countless magazine contributions. His interviews are thorough and informative but presented conversationally, as though he is simply visiting with an old friend. Weaver expertly guides the talk in a way that allows him to ask his questions in an informal manner, and likely he received a more detailed answer than if he had approached the subject as a journalist would”—horrortalk.com; “fascinating…genuinely obscure personalities…amazing stories…interesting and informative, while continually unearthing odd tidbits…a terrific read”—Shock Cinema; “addictive”—VideoScope; “Tom Weaver is the king of film historians”—Starlog; “lengthy, comprehensive interviews…Weaver clearly knows his sci-fi films…wonderful still photos”—Hitch; “great…Weaver scores again”—Little Shoppe of Horrors; “you’ll want this one”—Filmfax; “refreshing and welcome…another winner from the genre’s best”—Horror-Wood “his interviews are polished, well constructed and uncommonly professional”—Sci Fi. 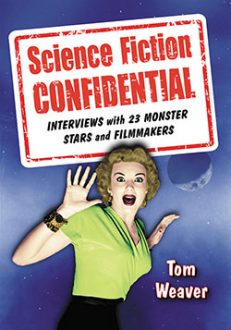