Despite her prominence as an actress, fashionista, social activist and the “sexiest woman in the world,” Scarlett Johansson has kept her life private. Her work ethic has been strong since her film debut in North (1994) at age 10. Then in 2003, Lost in Translation brought kudos and launched her adult career.
While she never abandoned the independents, Johansson became a leading lady in very big films, including eight outings as former Russian assassin Black Widow thwarting alien incursions in The Avengers and other films in the Marvel Universe.
This book surveys Johansson’s life and films from childhood to her 2019 Academy Award nominations for Jojo Rabbit and Marriage Story. Each film entry includes a plot synopsis, extracts from contemporary reviews, behind-the-scenes information, and the author’s analysis of the film. Looked at in-depth are the three Woody Allen collaborations, her role as Black Widow, and the films in which she becomes “the other.”

Kim R. Holston is a staff librarian in the multimedia department of Chester County Library, Exton, Pennsylvania where he assists the public seeking recommendations on motion pictures, audiobooks, eBooks, and music CDs. He has written or cowritten several books for McFarland.

Warren Hope taught in community colleges and universities in the Philadelphia area as an adjunct instructor in English following a career in publishing and public relations. He is the author of books of poems and critical studies of a number of authors including Philip Larkin and George Orwell. 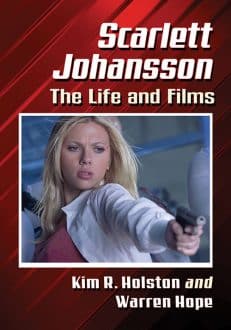