On October 15, 1880, with great excitement and fanfare, two Sarah Bernhardts set sail for New York from Le Havre for a theatrical tour of the United States. One wanted to introduce French culture to a backward country, and the other wanted to make money. As an actress, she behaved in a fashion that amused and scandalized her audiences, and as a woman, she was an unwed mother and a shrewd businessperson. Bernhardt’s multiple personas and “otherness” were what fascinated the American public; her name, her eccentricities, and her genius had already made her world famous.
Sarah Bernhardt’s first American theatrical tour, from her arrival in 1880 to her return to Europe in May 1881, is chronicled here. She traveled as far west as Kansas City and as far south as New Orleans, all the while sparking cultural commentary about her performances, her artwork, and her lifestyle. This book provides an overview of the contemporary reviews, caricatures and satires, considers Bernhardt’s reception by the American press and American audiences, and discusses the way in which the Bernhardt iconography was created and the assumptions that underlie it.

Patricia Marks, now retired, taught literature and composition at Valdosta State University for 30 years. In 1996, she was named Regents Distinguished Professor and in 2001 was awarded the Governor’s Award in Humanities. She is the author of four other books, including The ’Arry Ballads (2006) and lives with her husband in Valdosta, Georgia. She is a Deacon at Christ Episcopal Church.

4. “Ehue, Jaques! How frail we are!”: Bernhardt and the Sympathetic Barbarians    80 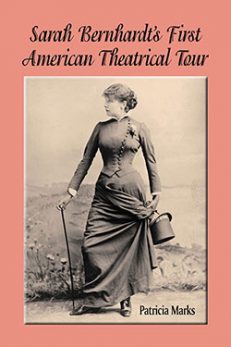