Connecticut privateer Nathaniel Fanning (1755–1805) was captured by the British during the Revolutionary War. Upon his release, he joined the Continental Navy and sailed as a midshipman under Admiral John Paul Jones during his most famous battles. Fanning later obtained his own command, sailing from French ports to prey upon British warships.
This new edition of Fanning’s memoir—first published in 1806—provides a vivid account of wartime peril and hardship at sea, and a first-hand character study of Jones as an apparent tyrant and narcissist. Vocabulary, spelling and narrative style have changed in the more than two centuries since Fanning’s chronicle, and some details clash with historical and geographical data. The editor has updated and annotated the text for modern readers, but attempted to retain much of the original memoir’s style.

Louis Arthur Norton, professor emeritus from the University of Connecticut, has published extensively on maritime history topics. Several of his journal articles have been awarded prizes for nonfiction and one for fiction. He lives in West Simsbury, Connecticut.

• “Norton has entirely recast Fanning’s language to create a paraphrase entirely accessible to the American ‘common reader’ of the twenty-first century.”—The Nautilus XI 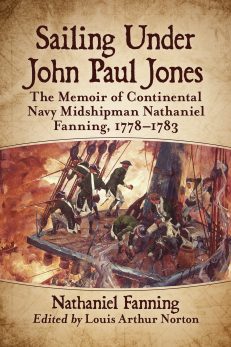 You're viewing: Sailing Under John Paul Jones $39.95
Add to cart