Initially stationed at the U.S. Army’s counterintelligence headquarters in Saigon, David Noble was sent north to launch the army’s first covert intelligence-gathering operation in Vietnam’s Central Highlands. Living in the region of the Montagnards—Vietnam’s indigenous tribal people, deemed critical to winning the war—Noble documented strategic hamlets and Green Beret training camps, where Special Forces teams taught the Montagnards to use rifles rather than crossbows and spears. In this book, he relates the formidable challenges he confronted in the course of his work. Weaving together memoir, excerpts from letters written home, and photographs, Noble’s compelling narrative throws light on a little-known corner of the Vietnam War in its early years—before the Tonkin Gulf Resolution and the deployment of combat units—and traces his transformation from a novice intelligence agent and believer in the war to a political dissenter and active protester.

David Grant Noble is a writer, photographer and the author of numerous books about the American Southwest. He lives in Santa Fe, New Mexico. His website is www.davidgrantnoble.com.

• “Earlier this afternoon I found a gem amidst the usual array of unsought mail: A copy of Saigon to Pleiku. … I stole a sneak peak at the book and found myself hooked well into the account. As I expected, [Noble’s] writing skill is everywhere present. What I hadn’t expected was the quality production of the book. The page design is fine but the real surprise is the quality of the paper that permitted the illustrations to come through with greater clarity than one might find in books from the larger publishers.”—Don Lamm, former head of W.W. Norton

• “David Noble, a very well established author and photographer of the southwest, has just chronicled an amazing story of his experiences in the highlands of Vietnam where he was stationed as member of the Army’s Counterintelligence Corps starting in May, 1962. He arrives as a very naive twenty-two year old who over the course of thirteen months, comes to understand the country, its very diverse population, especially the mountainous tribes as well as the impossible challenges faced by the United States. Through his eyes, his camera, excerpts from thirteen months of insightful letters to his family and his own beautiful writing, David creates a must read about Vietnam well before it became part of daily conversations that divided the country.”—Andrew K. Block, former chairman of Michael Reese Health Trust 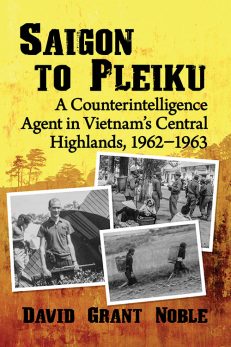