The Life and Times of a Baseball Hall of Famer

Rube Marquard’s life was touched by success and scandal at nearly every turn. In 1906, the teenage pitcher defied his father and became a ballplayer. Two years later, the Giants purchased his contract for the then record $11,000. He soon became the best left-handed pitcher in the game; over the course of his career he won 201 games, threw a no-hitter and pitched in five World Series.
Off the field, Marquard was a master at marketing himself, recreating his story as it suited him. He wrote his own newspaper column, starred in movies, delighted crowds by catching balls thrown off high buildings, and even appeared as a female impersonator. But it was his affair and brief marriage with vaudeville sensation Blossom Seeley that caused the most uproar. Along with Seeley, Marquard became the toast of Broadway to the chagrin of his baseball fans. Throughout his life, the pitcher re-created his story as it suited him; his largely fanciful account of his career in Lawrence Ritter’s Glory of Their Times (1966) was largely responsible for his election to the Hall of Fame in 1971. This book gives for the first time the true story of one of the most colorful and controversial baseball players of the century.

Attorney and history teacher Larry D. Mansch is the legal director for the Montana Innocence Project and has written four previous books. He lives in Missoula, Montana. 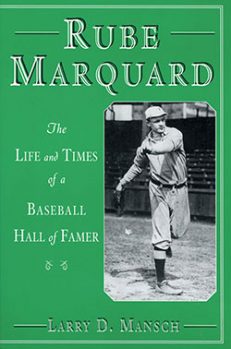