﻿ In an era of rowdy teams, the Cleveland Spiders (1887–1899) were baseball’s rowdiest. Managed by Oliver “Patsy” Tebeau, a quick-tempered infielder, the Spiders seemed to heap abuse of one kind or another on everyone—umpires, opposing teams, even the fans. Their aggression never brought home the pennant, but Cleveland’s battles with the league’s top clubs, including an 1895 Temple Cup victory over the Baltimore Orioles, are now legendary.
Yet the story of the Spiders amounts to more than a 12 year free-for-all. There were top-flight players like Ed McKean, George Davis, Jesse Burkett, and Cy Young. There was the racially progressive signing of Holy Cross star Louis Sockalexis, the first American Indian in the major leagues. And then there was the team’s final season, 1899, when a club ravaged by syndicalism set the standard for baseball futility.

“Baseball buffs will be crawling all over this account of the star-crossed Patsy Tebeau and the storied Cleveland Spiders, who worked their way down from excellence to the worst record in major league history. As usual, David Fleitz packs his story with compelling detail gleaned through prodigious research.”—Edward Achorn, author of Fifty-Nine in ’84 and The Summer of Beer and Whiskey; “David Fleitz has once again combined his dogged research and his talent for telling a story to bring Patsy Tebeau and his Cleveland Spiders into a modern light. Unlike the names of Cobb and McGraw, which have endured, the name of the highly intense and successful Tebeau has become mostly obscure to all but devoted baseball historians. Today’s baseball fan will be rewarded here with historical accuracy and an enjoyable read.”—Peter Mancuso, chair, Nineteenth Century Research Committee, Society for American Baseball Research (SABR). 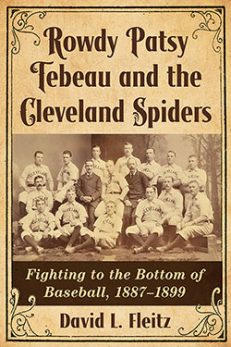 You're viewing: Rowdy Patsy Tebeau and the Cleveland Spiders $29.95
Add to cart