Rosalie Gardiner Jones and the Long March for Women’s Rights

In February 1913 young firebrand activist “General” Rosalie Gardiner Jones defied convention and the doubts of better-known suffragists such as Alice Paul, Jane Addams, and Carrie Chapman Catt to muster an unprecedented equal rights army. Jones and “Colonel” Ida Craft marched 250 miles at the head of their all-volunteer platoon, advancing from New York City to Washington, DC in the dead of winter, in what was believed to be the longest dedicated women’s rights march in American history. Along the way their band of protestors overcame violence, intimidation, and bigotry, their every step documented by journalist-embeds who followed the self-styled army down far-flung rural roads and into busy urban centers bristling with admiration and enmity. At march’s end in Washington, more than 100,000 spectators cheered and jeered Rosalie’s army in a reception said to rival a president’s inauguration.
This first-ever book-length biography details Jones’s indomitable and original brand of boots-on-the-ground activism, from the 1913 March on Washington that brought her international fame to later-life campaigns for progressive reform in the American West and on her native Long Island. Consistently at odds with conservatives and conformists, the fiercely independent Jones was a prototypical social justice warrior, one who never stopped marching to her own drummer. Long after retiring her equal rights army, Jones advocated nonviolence and fair trade, authored a book on economics and international peace, and ran for Congress, earning a law degree, a PhD, and a lifelong reputation as a tireless defender of the dispossessed.

Zachary Michael Jack is a professor of English at North Central College, in Naperville, Illinois, teaching courses in public writing, leadership, ethics, and values. A member of the board of directors of the Midwestern History Association (MHA), he leads Writing to Change the World workshops nationwide.

“The extraordinary story of an extraordinary woman in extraordinary times. Meticulously researched, impressively well-written, exceptional in both organization and presentation, Rosalie Gardiner Jones and the Long March for Women’s Rights is an especially recommended addition to personal, community, college, and university libraries.”—Midwest Book Review 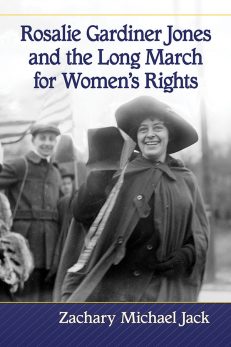 You're viewing: Rosalie Gardiner Jones and the Long March for Women’s Rights $39.95
Add to cart