During the last millennium and a half, Rome was the inspiration of artists, the coronation stage of German emperors, the distant desire of pilgrims, and the seat of the Roman popes. Yet Rome also lies within the northern range of P. falciparum malaria, the deadliest strain of the disease, against which northern Europeans had no intrinsic or acquired defenses. As a result, Rome lured a countless number of unacclimated transalpine Europeans to their deaths in the period from 500 to 1850 AD.
This book examines how Rome’s allure to European visitors and its resident malaria species impacted the historical development of Europe. It covers the environmental and biological factors at play and focuses on two of the periods when malaria potentially had the greatest impact on the continent: the heyday of the medieval German Empire and its conflicts with the papacy (c. 800-1300) and the Protestant Reformation (c.1500). Through explorations into the history of religion, empire, disease, and culture, this book tells the story of how the veritable capital of the world became the graveyard of nations.

Benjamin Reilly is an environmental historian working at Carnegie Mellon University’s branch campus in Qatar. His publications have included topics as various as French Revolutionary ideological discourse, lactose tolerance amongst Arabian Bedouins and Europe’s long engagement with the Eternal City of Rome. 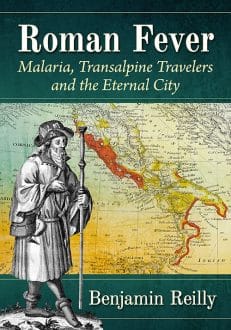