They are invincible warriors of steel, silky-skinned enticers, stealers of jobs and lovable goofball sidekicks. Legions of robots and androids star in the dream factories of Hollywood and leer on pulp magazine covers, instantly recognizable icons of American popular culture. For two centuries, we have been told tales of encounters with creatures stronger, faster and smarter than ourselves, making us wonder who would win in a battle between machine and human.
This book examines society’s introduction to robots and androids such as Robby and Rosie, Elektro and Sparko, Data, WALL-E, C-3PO and the Terminator, particularly before and after World War II when the power of technology exploded. Learn how robots evolved with the times and then eventually caught up with and surpassed them.

Steve Carper maintains a companion website to this book, RobotsInAmericanPopularCulture.com, which contains more than 300 images page-keyed to the text, along with links to over 50 of his articles on robot history. He lives in Rochester, New York.

Part One: The Robot ­Pre-Computer 9
1. The Robot and the Android: The Origin of the Species 11
2. The Heimlich Maneuver: Robots in Early Fiction 21
3. Is It Mechanism or Soul? Robots on the Stage 35
4. The Wonderful Walking Mechanical Men 46
5. “Quiet, Please—I’m Talking”: The Westinghouse Family of Robots 64
6. Iron Monster Turns Traitor: Amateur Robots 74
7. Buck, Flash, Tillie and Mickey: Robots in Comic Strips 89
8. A Tribe of Living Mechanical Men! Robots in Comic Books 110
9. Utterly Alien and Nonhuman: The Robot in Golden Age Science Fiction 128
10. The Automaton! Robots in Movies 148

“A deeply entertaining and enlightening book”—popcultureshelf.com 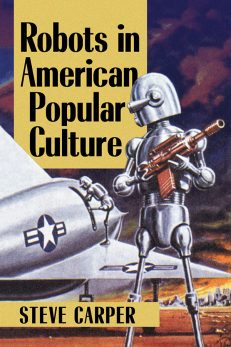 You're viewing: Robots in American Popular Culture $45.00
Add to cart