In bacteriology’s Golden Age (roughly 1870–1890) European physicians focused on bacteria as causal agents of disease. Advances in microscopy and laboratory methodology—including the ability to isolate and identify micro-organisms—played critical roles. Robert Koch, the most well known of the European researchers for his identification of the etiological agents of anthrax, tuberculosis and cholera, established in Germany the first teaching laboratory for training physicians in the new methods.
Bacteriology was largely absent in early U.S. medical schools. Dozens of American physicians-in-training enrolled in Koch’s course in Germany, and many established bacteriology courses upon their return. This book highlights those who became acknowledged leaders in the field and whose work remains influential.

1. Robert Koch: His Life and Role in Bacteriological Research 13

4. The Cartwright Lecture: Belfield vs. Formad 70

“this fascinating account of a pivotal era in scientific history demonstrates the powerful influence Koch and his students had on all aspects of medicine in the United States…a highly readable and valuable contribution to the history of American bacteriology. Recommended”—Choice. 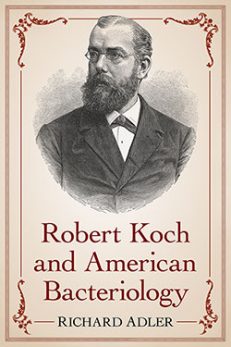 You're viewing: Robert Koch and American Bacteriology $39.95
Add to cart