“Wise old Vergil says in one of his Georgics, ‘Praise large farms, stick to small ones,’” Robert Frost said. “Twenty acres are just about enough.” Frost started out as a school teacher living the rural life of a would-be farmer, and later turned to farming full time when he bought a place of his own. After a sojourn in England where his first two books were published to critical acclaim, he returned to New England, acquired a new farm and became a rustic for much of the rest of his life.
Frost claimed that all of his poetry was farm poetry. His deep admiration for Virgil’s Georgics, or poems of rural life, inspired the creation of his own New England “georgics,” his answer to the haughty 20th-century modernism that seemed certain to define the future of Western poetry. Like the “West-Running Brook” in his poem of the same name, Frost’s poetry can be seen as an embodiment of contrariness.

George Monteiro is a professor emeritus of English and of Portuguese and Brazilian studies at Brown University and the author or editor of books on Henry James, Henry Adams, Robert Frost, Stephen Crane, Emily Dickinson, Fernando Pessoa, and Luis de Camões, among others. 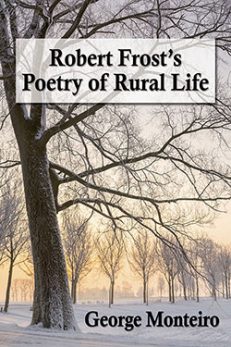