Essays on the Film Career

Robert Downey Jr. may be best known as Iron Man, but his career as an actor stretches back to the 1970s and features several Oscar-quality roles. He has worked with a wide range of innovative directors from Oliver Stone and Robert Altman to Richard Linklater and Shane Black, and has played punk kids, detectives, journalists and even a serial killer.
This collection of new essays examines, in roughly chronological order, more than 25 of Downey’s best performances in films as diverse as Less Than Zero, Chaplin, Natural Born Killers, A Scanner Darkly, The Soloist and Tropic Thunder. Including a biography, chronology and filmography, the book highlights the inseparability of the actor’s biography from his works and from the unique combination of talents he brings to his roles.

Erin E. MacDonald is a professor of English at Fanshawe College’s School of Language and Liberal Studies in London, Ontario. She published a literary companion book on Ed McBain and is writing one on Ian Rankin. Her articles have appeared in the Journal of American and Comparative Cultures and in Clues.

The ­Pick-Up Artist and the Failures of Virtuosity (Christian B. Long)  17

“Mad as a box of frogs”: Channeling Chaplin in the Role of a Lifetime (Erin E. MacDonald)  40

Queering Downey Part 1: Queer as Catalyst in Less Than Zero, Home for the Holidays and One Night Stand (Erin E. MacDonald)  86

“This too too sullied flesh”: The Resurfacing of Robert Downey Jr. (Jason Davids Scott)  121

“Lie down with me Watson”: Transgression and Fragile Masculinity in the Detective Films of Robert Downey Jr. (Ruth ­O’Donnell)  136

Fragmented Relationships: ­Father-Son Dynamics in Less Than Zero, A Guide to Recognizing Your Saints and Iron Man 2 (Jennifer Harrison)  191

Language and Power in The Soloist and A Guide to Recognizing 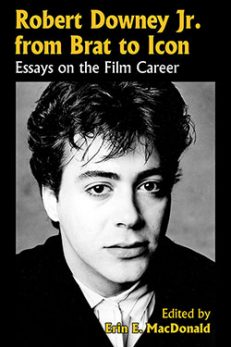 You're viewing: Robert Downey Jr. from Brat to Icon $29.95
Add to cart