An Introduction to Cause and Impact

The fundamental point of this book is that, in the past, the world’s political, economic, military and social development took place during a time of relatively stable sea level. That time, however, is now over: The world must begin to cope with rising seas.
This book is a wide-ranging introductory survey. It addresses global warming, the hydrologic cycle, why we should care about the rise of the oceans, storm surges and other extreme events, the changing seas and their shorelines, cities and countries of the Atlantic, Pacific and Indian ocean basins, the West Antarctic Ice Sheet and the Greenland Ice Sheet, case studies on how the Netherlands and the U.S. plan to cope with sea level rise, the likely impacts of this rise, getting to know the experts on sea level rise, and very long term prospects for the world’s shorelines.

Hunt Janin is an American writer living in southwestern France. He has written numerous nonfiction and scholarly books on a range of subjects, including medieval history and cross-cultural studies.
Scott Mandia is a professor of physical sciences at Suffolk County Community College on Long Island, New York. He has authored numerous weather and climate-related publications both in print and online.

VII. Cities and Countries of the Atlantic Ocean Basin      60

VIII. Cities and Countries of the Pacific Ocean Basin      78

IX. Cities and Countries of the Indian Ocean Basin      91

XII. A Range of Options to Cope with Sea Level Rise

“Janin and Mandia are to be commended for their impressive writing skills, intelligent presentations, and unusually intensive information-gathering efforts…valuable…highly recommended”—Choice; “excellent new book…well-referenced and scientifically accurate”—Skeptical Science; “if you’re looking for a comprehensive discussion of one of the most pressing issues on the planet…the threat of global sea level rise…then this is the book for you.”—Michael E. Mann, Penn State University, Nobel Peace Prize winner. 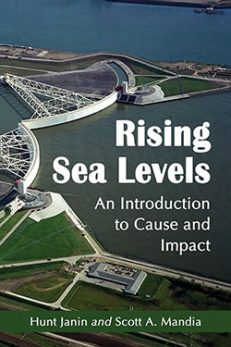