Richard L. Davis and the Color Line in Ohio Coal

Born in Roanoke County, Virginia, on the eve of the Emancipation Proclamation, Richard L. Davis was an early mine labor organizer in Rendville, Ohio. One year after the 1884 Great Hocking Valley Coal Strike, which lasted nine months, Davis wrote the first of many letters to the National Labor Tribune and the United Mine Workers Journal. One of two African Americans at the founding convention of United Mine Workers of America in 1890, he served as a member of the National Executive Board in 1886–97. Davis called upon white and black miners to unite against wage slavery. This biography provides a detailed portrait of one of America’s more influential labor organizers.

Frans H. Doppen is a professor of social studies education and chair of the Department of Teacher Education at Ohio University in Athens, Ohio. 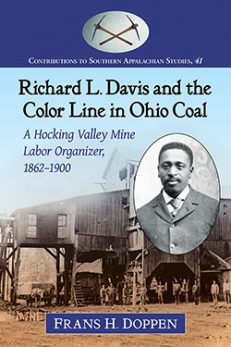 You're viewing: Richard L. Davis and the Color Line in Ohio Coal $29.95
Add to cart