During the Civil War, thousands of wounded Union soldiers and Confederate prisoners convalesced in a general army hospital in rural Portsmouth Grove, Rhode Island. Because of its location on the periphery of the action, the hospital has remained a footnote to the dramatic sweep of Civil War literature. However, its history and the experiences of the doctors, nurses, patients and guards that gave it life provide a new perspective on the interaction between the army and society in wartime and on life in Civil War America. This in-depth account also explores the barbarities of medicine, daily routine in a general army hospital, the role of citizens in providing aid, the later adventures of former patients and staff, and the final resting places of those who died on the grounds.

Frank L. Grzyb, author of six previous books, has contributed numerous articles to newspapers and magazines about America’s Civil War. He is a member of the Rhode Island Civil War Round Table and lives in Rhode Island. 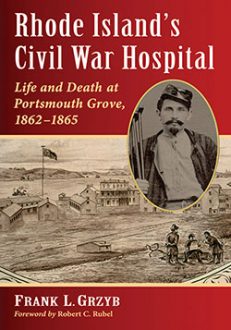