While countless films have been based on fictional characters, a surprising number have also been based on the lives of real people. This comprehensive reference book covers 640 nonfictional characters of historical or social importance who have been portrayed in at least two feature films. It lists 569 real people arranged alphabetically (from George Adamson to Emile Zola), provides a brief biography of each, and lists each film in which he or she has been portrayed. Such information as the actor portraying the real person and the country, year of release, running time, color or black & white, director(s), source (novel, play, etc.), awards, alternate titles (if any), and cast credits are given. The appendices list 71 additional real people who have been portrayed in feature films, including American presidents, British, French, German and Russian monarchs, and Billy the Kid and Wild Bill Hickock.

The late Michael G. Stevens was a talented actor, musician, and writer.
Editor R. Thompson is a graphic artist who lives in Chelmsford, Massachusetts. 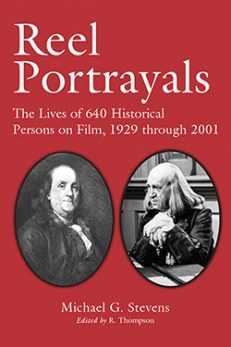