Redcoats on the Cape Fear

Nestled on the banks of the Cape Fear River, Wilmington, North Carolina, remains famous as a blockade-running port during the Civil War. Not as renowned is the city’s equally vital role during the Revolution. Through the port came news, essential supplies, and critical materials for the Continental Army. Both sides contended for the city and both sides occupied it at different times. Its merchant-based economy created a hotbed of dissension over issues of trade and taxes before the Revolution, and the presence of numerous Loyalists among Whigs vying for independence generated considerable tension among civilians. Based on more than 100 eyewitness accounts and other primary sources, this volume chronicles the fascinating story of Wilmington and the Lower Cape Fear during the Revolution.

Robert M. Dunkerly, a park ranger at Richmond National Battlefield Park, is an historian, author, and speaker involved in historic preservation and research.

“Dunkerly, draws on firsthand accounts and other primary sources to shed light on the town’s preparations for war”—Reference & Research Book News. 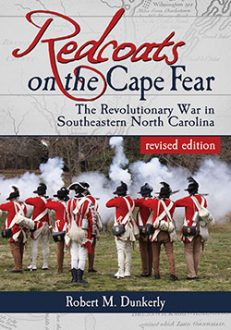 You're viewing: Redcoats on the Cape Fear $29.95
Add to cart