Rebels in the Rockies

Confederate Irregulars in the Western Territories

The Civil War in 1861 found Southerners a minority throughout the West. Early efforts to create military forces were quickly suppressed. Many returned to the South to fight while others remained where they were, forming a potentially disloyal population. Underground movements existed throughout the war in Colorado, California, Nevada, New Mexico, Arizona and even Idaho. Repeatedly betrayed and overwhelmed by Union forces and without communications with the South, these groups were ineffective.
In southern New Mexico, Southerners, who were the majority, aligned themselves with the Confederacy. Four small companies of irregulars, one Hispanic, fought (effectively) as part of the abortive Confederate invasion force of 1861–2. The most famous of these, the “Brigands,” were close in function to a modern special forces unit. In 1862 the Brigands were sent into Colorado to join up with a secret army of 600–1,000 men massing there, but were betrayed. Returning to Texas, the Brigands and the other irregulars were used for special operations in the West throughout the War; they also fought in the Louisiana-Arkansas campaigns of 1863–4.

4. The Confederate Army of New Mexico 37

“recommended”—Civil War Books and Authors; “there is much to commend in Pittman’s work. He has compiled in a single volume the fascinating stories of New Mexico’s rebels and followed them further than any author to date”—The Journal of Arizona History; “an excellent contribution to the history of the Civil War in the far west and the study of irregular operations during the war.”—The NYMAS Review; “an excellent contribution to the history of the Civil War”—Strategy Page; “Pittman has done a marvelous job in bringing the Civil War West to life…in-depth study…Pittman is a gifted storyteller who deftly navigates his way through a considerable amount of material covering a large geographic area…an entertaining read that is easy to recommend”—Southwestern Historical Quarterly; “of great interest to students of both Western history and Civil War history…well-researched, well-documented”—The Denver Westerners Roundup; “the author is to be commended for bringing this largely unknown facet of the war to the public’s attention”—The Journal of America’s Military Past; “only a small number of works on the war in the Far West have emerged. Rebels in the Rockies fills the hole in the existing literature quite nicely. Rebels in the Rockies is an important work on the war in New Mexico, Arizona and Colorado”—Civil War News; “with an antiquarian’s passion for detail, Pittman presents mountains of information”—Civil War Times; “Pittman is an excellent writer and he utilizes the available evidence to the utmost”—Civil War Book Review. 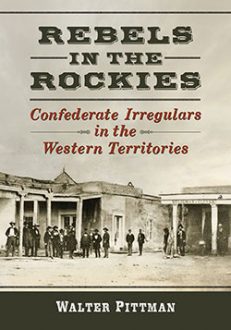