Rebellion as Genre in the Novels of Scott, Dickens and Stevenson

When three of Britain’s best-loved and best-selling authors each publish at least two novels with a historical rebellion theme, there might be an interesting pattern worth examining. This is a long overdue study of the previously overlooked rebellion novel genre, with a close look at the works of Sir Walter Scott (Waverly and Rob Roy), Charles Dickens (A Tale of Two Cities and Barnaby Rudge), and Robert Louis Stevenson (Kidnapped and The Young Chevalier). The linguistic and structural formulas that these novels share are presented, along with a comparative study of how these authors individualized the genre to adjust it to their needs. Scott, Dickens and Stevenson were led to the rebellion genre by direct radical interests. They used the tools of political literary propaganda to assist the poor, disenfranchised and peripheral people, with whom they identified and hoped to see free from oppression and poverty.

Anna Faktorovich is the founder and director of the Anaphora Literary Press and the editor-in-chief of the Pennsylvania Literary Journal. She has been a professor of English for Middle Georgia College and for Edinboro University of Pennsylvania. She lives in Hephzibah, Georgia. 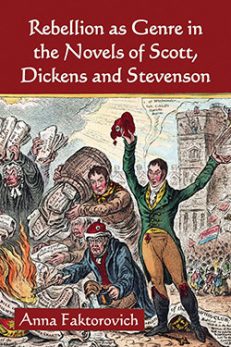 You're viewing: Rebellion as Genre in the Novels of Scott, Dickens and Stevenson $39.95
Add to cart