Inside the 1984 Reelection Campaign’s Secret Operation Against Geraldine Ferraro

When rumors about Geraldine Ferraro—the first woman vice-presidential nominee by a major party in U.S history—reached First Lady Nancy Reagan during the 1984 presidential election, a secret operation was launched to investigate her. It revealed Ferraro’s ties to organized crime and the extent to which she would have been subject to pressure or blackmail by the Mafia if elected. Written by an insider responsible for running the investigation, this never-before-told story goes behind the scenes as an incumbent president’s campaign works to expose a political opponent’s mob connections. Part detective story, part political thriller, the narrative features all the major players in the Reagan White House and 1984 reelection committee, with revealing anecdotes about Ronald and Nancy Reagan.

“Reagan’s Cowboys is something of a memoir of Robert’s career with the 40th president, and as such, it’s a time machine back to the days of typewriters, hard-line telephones, and Marlboro cigarettes…be grateful to Roberts for giving us history as it actually happened, uncensored and un-politically corrected. …Roberts gives us glimpses of a huge cast of characters in Reaganworld”—Brietbart 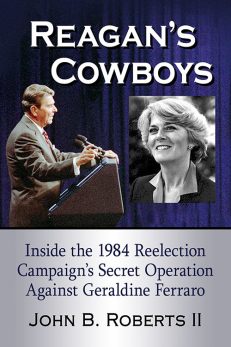