This is the first book-length biography of Hall of Fame catcher Ray Schalk, once described as the yardstick against which all other catchers were measured. For years the top defender at his position, Schalk was also a fiery leader on the field, and he guided two teams to the World Series. (One of those teams, however, was the 1919 Black Sox, whose conspiracy to throw the Series left Schalk with a deep and abiding sense of betrayal.)
After he retired as a player, the Illinois native spent decades as a manager or coach on the collegiate, minor league, and major league levels. Schalk entered the National Baseball Hall of Fame in 1955.

Brian E. Cooper is the executive editor and editorial board chairman of the Telegraph Herald (Dubuque, Iowa). His 2007 biography of Red Faber was a finalist for the Larry Ritter Award. A member of the Society for American Baseball Research, he lives in Dubuque.

“meticulously researched…loaded with quality photographs…definitive”—The Inside Game; “Ray Schalk was more than a key piece in the “Black Sox” puzzle, so an in-depth examination of his career is a worthwhile project and long overdue. “Cracker” is a window into some of baseball’s most fascinating years, and Brian Cooper has done eye-opening research that makes this biography work on several levels.”—Gene Carney, author of Burying the Black Sox; “Brian Cooper tells the compelling story of one of baseball’s greatest catchers in this well-written and exhaustively researched account of Ray Schalk’s career. This is an outstanding baseball biography for real fans of the game.”—Ken Paulson, former editor, USA Today; “Plenty has been written about the 1919 Black Sox. It’s time one of the honest White Sox, Hall of Fame catcher Ray Schalk, got some attention. Brian Cooper gives him his due in this well-researched biography.”—Norman L. Macht, author of Connie Mack and the Early Years of Baseball, recipient of the SABR Larry Ritter Award; “Fearless, incorruptible and utterly indestructible, Hall of Famer Ray Schalk was a mainstay of the Chicago White Sox in their greatest of days—and their years of shame accompanying the Black Sox Scandal. Brian Cooper adeptly explores the life of “Cracker” Schalk in this first-ever biography of the great backstop from Litchfield, Illinois—and offers up a fascinating insider’ look at the scandal, a portentous event that altered baseball history and the fortunes of the South Side ballclub for decades to come.”—Richard C. Lindberg, White Sox team historian and author of Total White Sox. 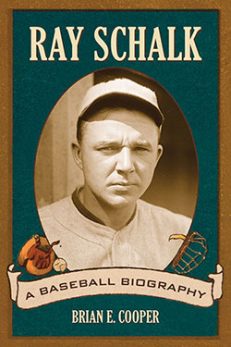