During the horror and conflict of World War II, a fictional radio character named Captain Midnight stormed his way into the consciousness of American radio listeners. Captain Midnight (a.k.a. Charles J. Albright) was a vigorous, mature figure whom listeners could easily perceive defending their United States. The scripts, well written and expertly plotted, had a wide appeal—from excited children and their Secret Squadron Code-O-Graphs to U.S. Army Air Corps flight crews. But to fans (then and now) of the original 15-minute serial adventures, the “real” Captain Midnight retired when the show went to 30 minutes, replaced actor Ed Prentiss, and simplified the writing and plotting.
Using facts, details and events from those original early radio scripts of Captain Midnight, the author has constructed a “biography” of the great wartime aviation hero, covering his origins and adventures. Concluding the work are thorough appendices that discuss Secret Squadron equipment, aircraft and rocketry; cryptology and code-cracking in the series; and Captain Midnight’s portrayal in various media (books, radio, television, serials, comics and newspaper strips).

Licensed pilot Stephen A. Kallis, Jr., has written for such publications as General Aviation News, Cryptologia, and Popular Mechanics. An active member of the Society of Motion Picture and Television Engineers, he lives in Tampa, Florida.

“a valuable contribution…belongs on the shelves of all fans of high adventure in general and radio serials in particular”—Dime Novel Round-Up; “if you heard the original radio programs, this book will recall your youth, if you are a stranger to Captain Midnight, you will enjoy learning what you missed”—Cryptologia; “follows the Captain Midnight story from his beginnings to the close of World War II”—North American Radio Archives; “deftly imparts technical information about the planes (real and fictional) without sounding like a textbook. [Photographs] add an integrity to the storyline that helps keep the period fresh in the reader’s mind”—The Nostalgia Page; “an admirable job”—SPERDVAC Radiogram; “this is a wonderful addition to any library”—Eye Spy; “compelling reading”—News Radio. 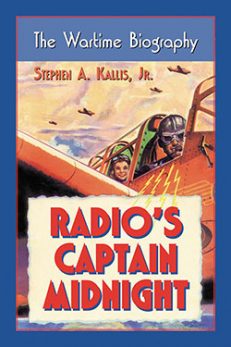