When radio broadcasting began in the early 1920s, the radio was a magic box aglow with the future, drawing humanity into a new age. Some thought it would dissolve the distance between time and place, others that human minds would become transparent, one tuned to another. Performers claiming psychic powers turned radio broadcasting into a fabulous money machine. These “mentalists,” born from vaudeville, circuses, sideshows, and the Spiritualist and New Thought movements of the mid-late 19th century, used the language of wireless technology to explain their ability to see the past, present, and future. Casting their mystical knowledge as a scientifically honed craft, these mentalists persuaded millions to pay for dubious advice until governmental and public pressures forced them off the air. This book is a history of over 25 performers who practiced their art behind studio microphones during the early years of radio broadcasting, from about 1920 to 1940. Here, laid out for the first time, is the tale of how they made cash rain from the heavens and harnessed the sensation of the radio in search of wealth, health, love, and success.

John Benedict Buescher is the former chief of the Tibetan Broadcast Service of the Voice of America. He has authored articles on radio broadcasting to Tibet and books on the history of Buddhism and on the history of 19-century American Spiritualism. He is a co-director of the International Association for the Preservation of Spiritualist and Occult Periodicals. He lives in Georgetown, Texas.

“Includes details of how powerful radio stations along the border helped former vaudeville actors…some of the most popular radio programs in the United States featured radio psychics…author John Buescher dove deep into this history”—Texas Standard, The National Daily News Show of Texas 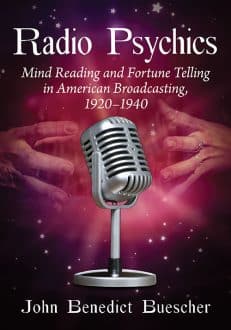