Radio by the Book

Adaptations of Literature and Fiction on the Airwaves

During the first half of the 20th century, radio’s hunger for captivating characters and stories could not be sated. Three national networks and dozens of independent stations had to fill a vast expanse of air time with comedy, adventure, mystery, drama and music, night after night. It’s no surprise that producers and writers looked to outside sources, drawing some of old-time radio’s most beloved characters (Sherlock Holmes, Tarzan, Hopalong Cassidy, Buck Rogers) directly from books.
This work examines individual characters that jumped from prose to radio and a number of programs that specialized in dramatizing literature. It covers mystery and detective shows, adventure stories, westerns, and science fiction, and anthology shows that adapted novels by such greats as Twain, Steinbeck and Dickens. The text explores how the writers and producers approached the source material—what they changed, what they kept and what they left out.

Tim DeForest lives in Sarasota, Florida, and is the circulation manager of the library at the Ringling School of Art and Design. His writings cover a variety of subjects, including radio, literature, comics, military history and the Wild West. 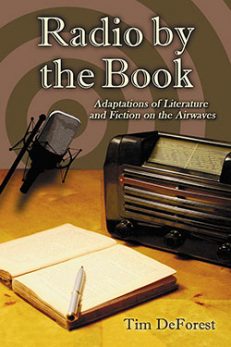