Race to the Sky

The Wright Brothers Versus the United States Government

In their struggle to fly, the Wright brothers were engaged in strife with their own government. President McKinley’s administration decided to dedicate an unprecedented amount of money to ensure that the first flyers would be American but the Wrights refused such financial support for fear of the strings attached, and resolved to go it alone.
This book tells the story of the raw ambition, high ideals, greed, and cloak and dagger tactics of each side. By 1903, the Federal venture was in its seventh year and the Wright brothers had been working nights and weekends, often in secret for four years. Everything came to a head in eight tense days in December when the battle—and the fame and fortune that would follow—was decided.

Stephen B. Goddard practices law and teaches history and public policy at Trinity College in Hartford, Connecticut. The author of three books, he also writes for HistoryWire.com. 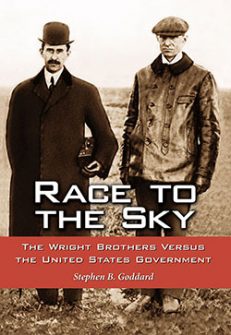