J. Williams Thorne (1816–1897) was an outspoken farmer who spent the first half-century of his remarkable life in Chester County, Pennsylvania, where he took part in political debates, helped fugitive slaves in the Underground Railroad and was active in the Progressive Friends Meeting, a national group of activist Quakers and allied reformers who met annually in Chester County.
Williams and his associates discussed vital matters of the day, from slavery to prohibition to women’s rights. These issues sometimes came to Thorne’s doorstep—he met with nationally prominent reformers, and thwarted kidnappers seeking to enslave one of his free black tenants. After the Civil War, Williams became a “carpetbagger,” moving to North Carolina to pursue farming and politics. An “infidel” Quaker (anti-Christian), he was opposed by Democrats who sought to keep him out of the legislature on account of his religious beliefs. Today a little-known figure in history, Williams made his mark through his outspokenness and persistent battling for what he believed.

Max Longley is an independent scholar in Durham, North Carolina. His works include For the Union and the Catholic Church: Four Converts in the Civil War (McFarland, 2015).

Acknowledgments v
Preface 1
1. The Ecclesiastical Trial 3
2. Born into a Cold World 5
3. Let Truth and Error Grapple 20
4. The Federal Invasion and the Progressive Friends 35
5. Reform, Slave Raid, War 49
6. Keystone Stater and Tar Heel 65
7. Cast Out 87
8. The Carpetbagger and the Carpet Will 106
9. Returning Home 126
10. Speaking His Mind 142
Epilogue 156
Appendix I. Memorial Resolution on J. Williams Thorne Adopted by the Progressive Friends Meeting, Longwood, 1897 163
Appendix II. J. Williams Resorts to Satire to Defend What He Considers the Principles of a True Republic, 1877 165
Chapter Notes 171
Bibliography 193
Index 203 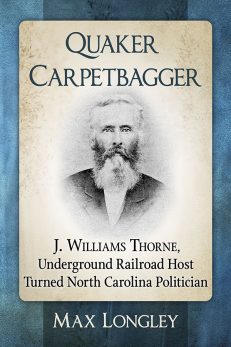