This book is a comprehensive history of the most successful straight-to-video horror franchise of all time: Puppet Master. It provides an in-depth exploration of all 14 films to date—including a made-for-TV crossover and a theatrical reboot—and the action figures, comics, and other merchandise that have helped to keep the brand alive for the past 30 years. Puppet Master was the first film for independent producer extraordinaire Charles Band’s Full Moon Entertainment, launching a franchise and a micro-budget studio that have both continued to this day. What led to the film’s success? How did a little movie about killer puppets, designed to cater to the then-booming video market, wind up surviving video stores themselves? How did a series that had never even had a theatrical entry wind up with an unusually successful toy series? All of these questions are answered within these pages. Featuring new interviews with some of the biggest creative minds behind the franchise, as well as dozens of behind-the-scenes photos, this book is the ultimate guide to horror’s most murderous marionettes.

Nat Brehmer is a horror journalist who has written for Bloody Disgusting, Dread Central, Wicked Horror, and Diabolique Magazine, among others. He lives in Apopka, Florida. 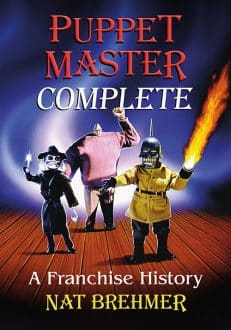