With the growing emphasis on theory in literary studies, psychoanalytic criticism is making notable contributions to literary interpretation. Sixteen chapters in this work explore the psychological subtexts of such important children’s books as Carlo Collodi’s Pinocchio, Roald Dahl’s James and the Giant Peach, Kenneth Grahame’s The Wind in the Willows, Louise Fitzhugh’s Harriet the Spy, Mark Twain’s The Prince and the Pauper, and E.B. White’s Charlotte’s Web. Drawing on the ideas of such psychoanalytic theorists as Sigmund Freud, Alice Miller, D.W. Winnicott and Jacques Lacan, it analyzes the psychological development of characters, examines reader responses, and studies the lives of authors and illustrators such as Beatrix Potter and Jessie Willcox Smith.

Lucy Rollin is professor emerita of English at Clemson University, where she taught children’s and young adult literature. She has written many books and essays on children’s literature and pop culture.

Mark I. West is the former chair of the English department at the University of North Carolina at Charlotte. He has written or edited nineteen books on children’s literature and culture and is a former president of the Children’s Literature Association.

Lucy Rollin and Mark I. West 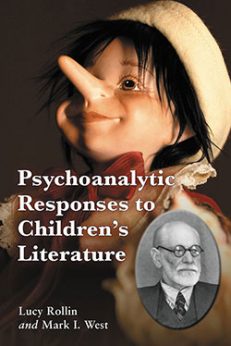 You're viewing: Psychoanalytic Responses to Children’s Literature $29.95
Add to cart