Prisoners of War at Dartmoor

The incarceration of French and American prisoners of war in Dartmoor Prison, at a time when Britain was at war with both its traditional enemy and the young nation of former British colonies, was a dark and unusual episode. Acts of cruelty and degradation were countered by defiance and a spirited loyalty by the prisoners to their respective countries. Much of the story is told firsthand by those who were there, against a background of warfare and glorious victories on all sides.
The author relates how a barren landscape that was (and is) subject to the worst of winter weather was transformed into a thriving township by one very determined man, Sir Thomas Tyrwhitt, and why such a place was chosen to build a prison. The design and construction of the prison are described, as are the experiences of the men held in the harsh, overcrowded conditions of Dartmoor. From May 1809 to February 1816, 271 American and more than 1100 French prisoners of war died in confinement.

16. The Inquiries into the “Melancholy Occurrence”  140

“dozens of images…dramatically illustrate the depot and prisoners’ lives…James knows the material and has walked the ground”—Naval History; “full of interesting details of the origins of the prison itself and life within its walls”—The Mariner’s Mirror; “This author is a well known authority on Dartmoor Prison and here in his new book he tells us what it would have been like to have lived in this hell hole they called the Dartmoor Depot”—Dartmoor News; “James’s study of the harrowing captivity of more than six thousand Americans in the British prison called Dartmoor is a significant contribution to our knowledge about the conflict and the treatment of prisoners of war more broadly”—H-Net Reviews. 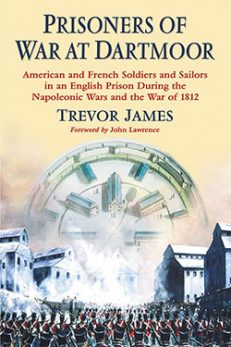 You're viewing: Prisoners of War at Dartmoor $39.95
Add to cart