President-Making in the Gilded Age

Nominating conventions were the highlight of presidential elections in the Gilded Age, an era when there were no primaries, no debates and nominees did little active campaigning. Unlike modern conventions, the outcomes were not so seemingly predetermined.
Historians consider the late 19th century an era of political corruption, when party bosses controlled the conventions and chose the nominees. Yet the candidates nominated by both Republicans and Democrats during this period won despite the opposition of the bosses, and were opposed by them once in office.
This book analyzes the pageantry, drama, speeches, strategies, platforms, deal-making and often surprising outcomes of the presidential nominating conventions of the Gilded Age, debunking many wildely-held beliefs about politics in a much-maligned era.

Stan M. Haynes has practiced law with the Baltimore law firm of Semmes, Bowen & Semmes since 1983. He lives in Ellicott City, Maryland.

“this excellent book provides incredible details and insights into the Republican and Democratic national conventions during that period”—James A. Garfield National Historic Site. 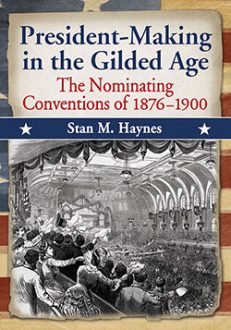 You're viewing: President-Making in the Gilded Age $49.95
Add to cart